Are you looking for inexpensive Banff National Park elopement packages that will allow you to have your outdoor wedding covered in a way that is both detailed and authentic? Alberta elopement photographer Dorota Karpowicz would love to hear from you if you are preparing to organize a simple affair that might be an adventure, destination, lakeside, mountain, or another type of non-traditional marriage celebration. The following small wedding took place at Mount Babel, a mountain peak of the Bow Range, but Dorota is available for small events in or around all of Alberta. For more information about having this Canadian adventure wedding photographer competently document your elopement, contact Dorota Karpowicz promptly. 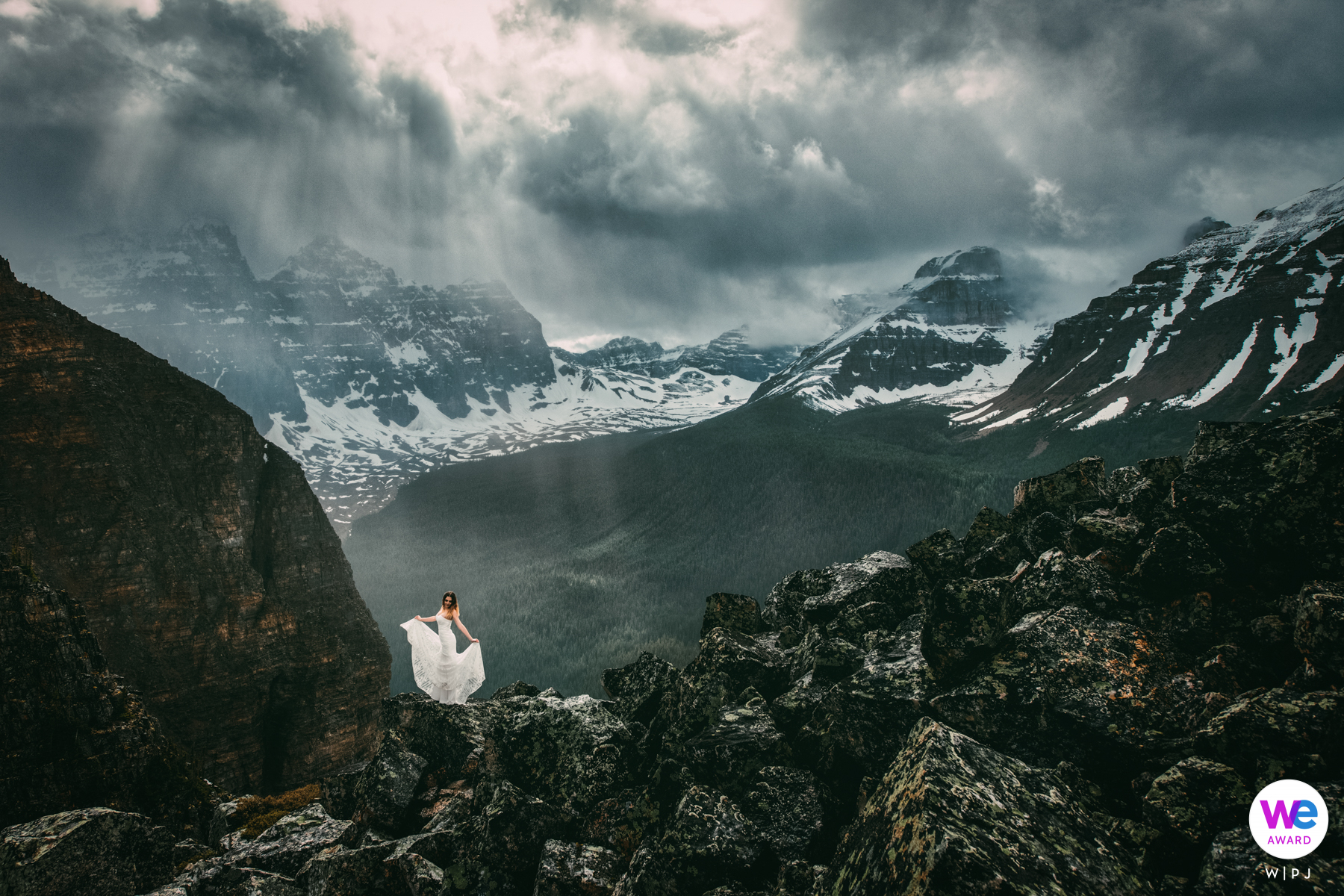 With the rugged terrain of Mount Babel surrounding her, the bride poses for a whimsical yet powerful portrait as the light from the heavens shines down upon her.

Mila and Peter came to the Canadian Rocky Mountains for an elopement from Saskatchewan. They wanted a change from the prairie’s scenery, which they see on the daily basis.

The emerald lakes, juicy green pine trees, and slowly flowing glaciers appeared to them as the perfect landscape for their desired elopement.

The short ceremony took place at Moraine Lake in the Rocky Mountains. The lake is set in the Valley of Ten Peaks surrounded by mountains, which are so close and so tall that they create a surreal scenery.

Moraine Lake is one of the most beautiful and most accessible lakes in Banff National Park, therefore is a very busy and touristy place, but if you look enough you can find the spot along the longshore, which is quiet and desolate.

Patrick Smiley, their always happy officiant, greeted the young couple and began the intimate ceremony. There were only bride and groom as well as their officiant, surrounded by the peaks on the shore of the jaw-dropping turquoise color lake. The ceremony was very emotional, the lovely birds exchanged their vows and signed the legal documents.

After the ceremony, the newlyweds embarked on an adventure elopement session. They climbed up the Tower of Babel — the northern end of Mount Babel. The Tower of Babel was first named by the famous Walter Wilcox in 1899 because the tower profile reminded him of the biblical Tower of Babel. The scramble was very challenging, but the view was so rewarding!!

At the top of the peak, Mila and Peter changed to their official wedding outfits. The portrait session began among the most beautiful surroundings. Just 500 meters below were the blue waters of Moraine Lake. Despite the scattered showers, the couple was so happy and cheerful, and nothing could deter their optimism. 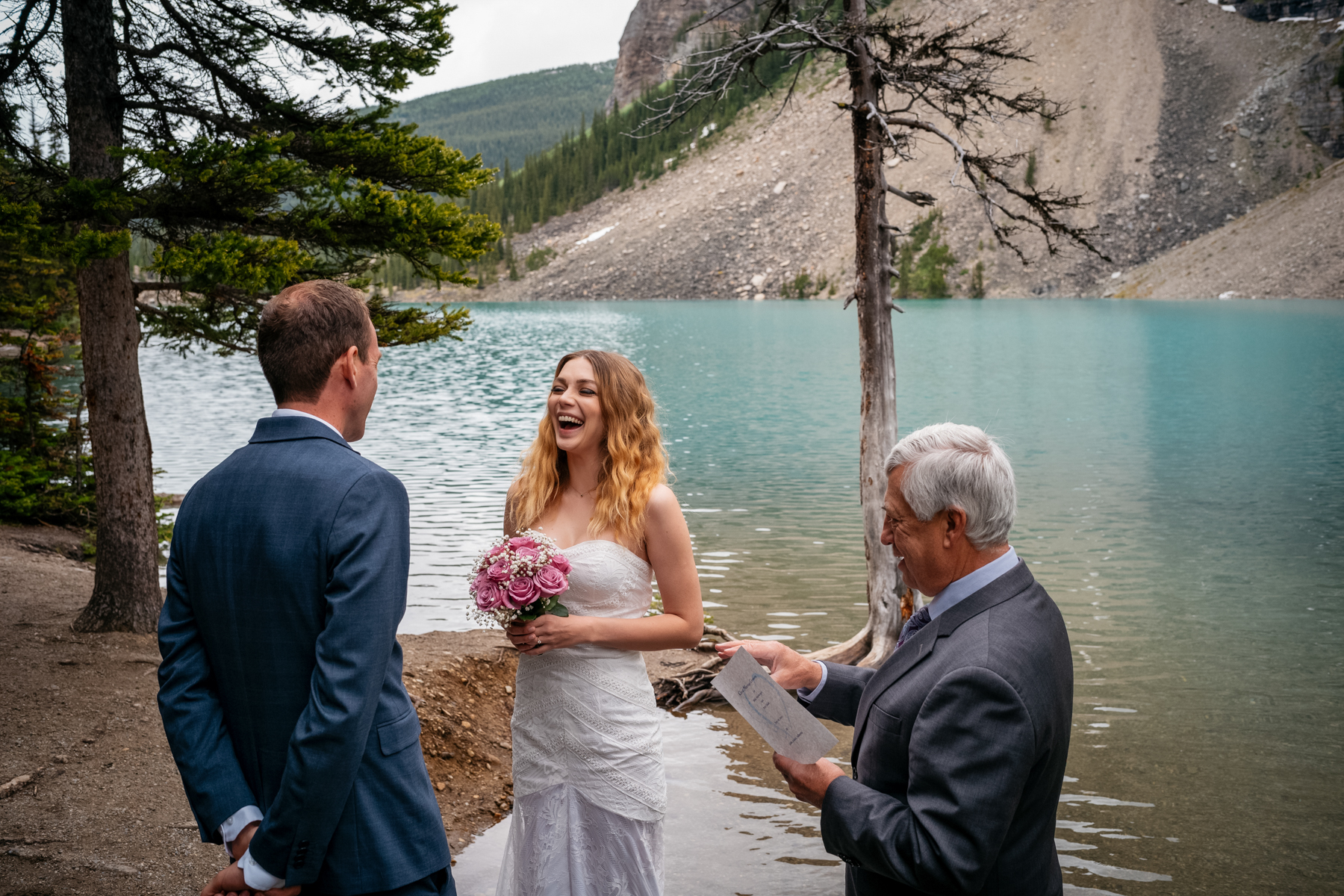 With Mother Nature serving as the witness to their union, Mila and Peter began their elopement ceremony at the water's edge. Mila, who was simply delighted to become Peter's wife, laughs and smiles during the ceremony. 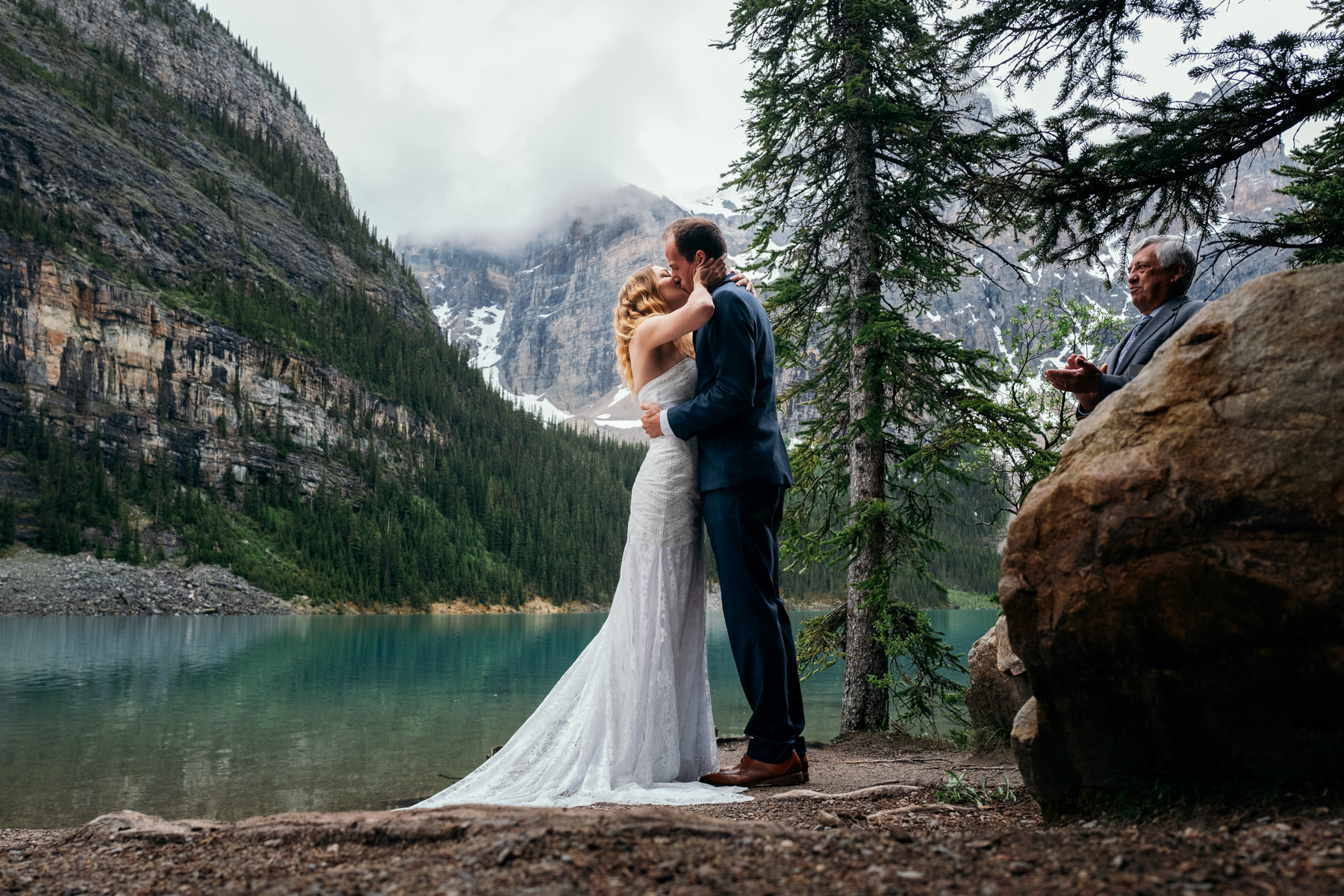 As if it were a scene out of a fairytale, the bride and groom share a passionate kiss in the wilderness, with no one else around except for the majestic mountains and towering trees. 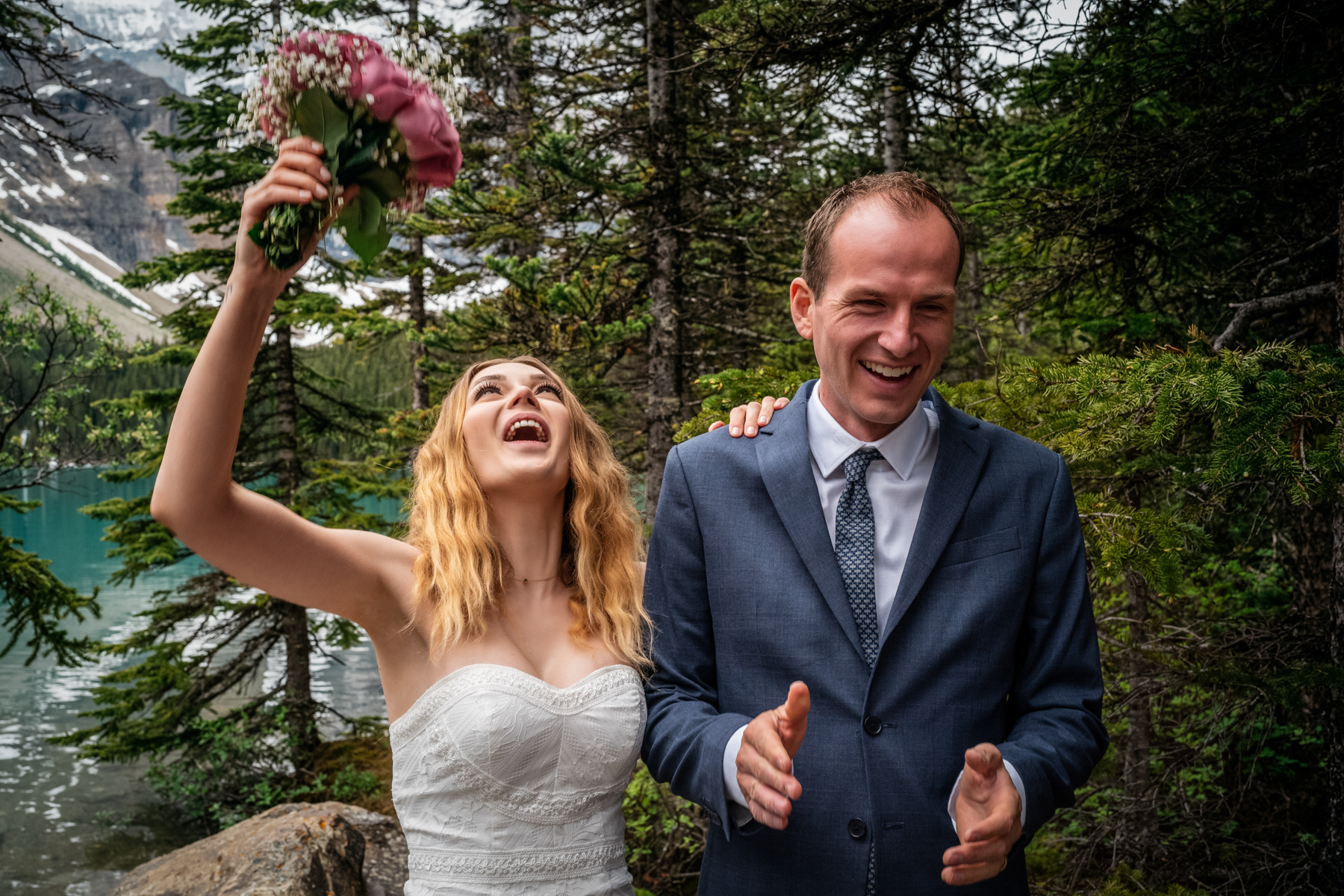 Holding her bouquet in the air and looking up to the sky to shout out her elation, Mila celebrates her new marriage. Her groom, Peter, laughs and claps his hands knowing that his wife has never been happier. 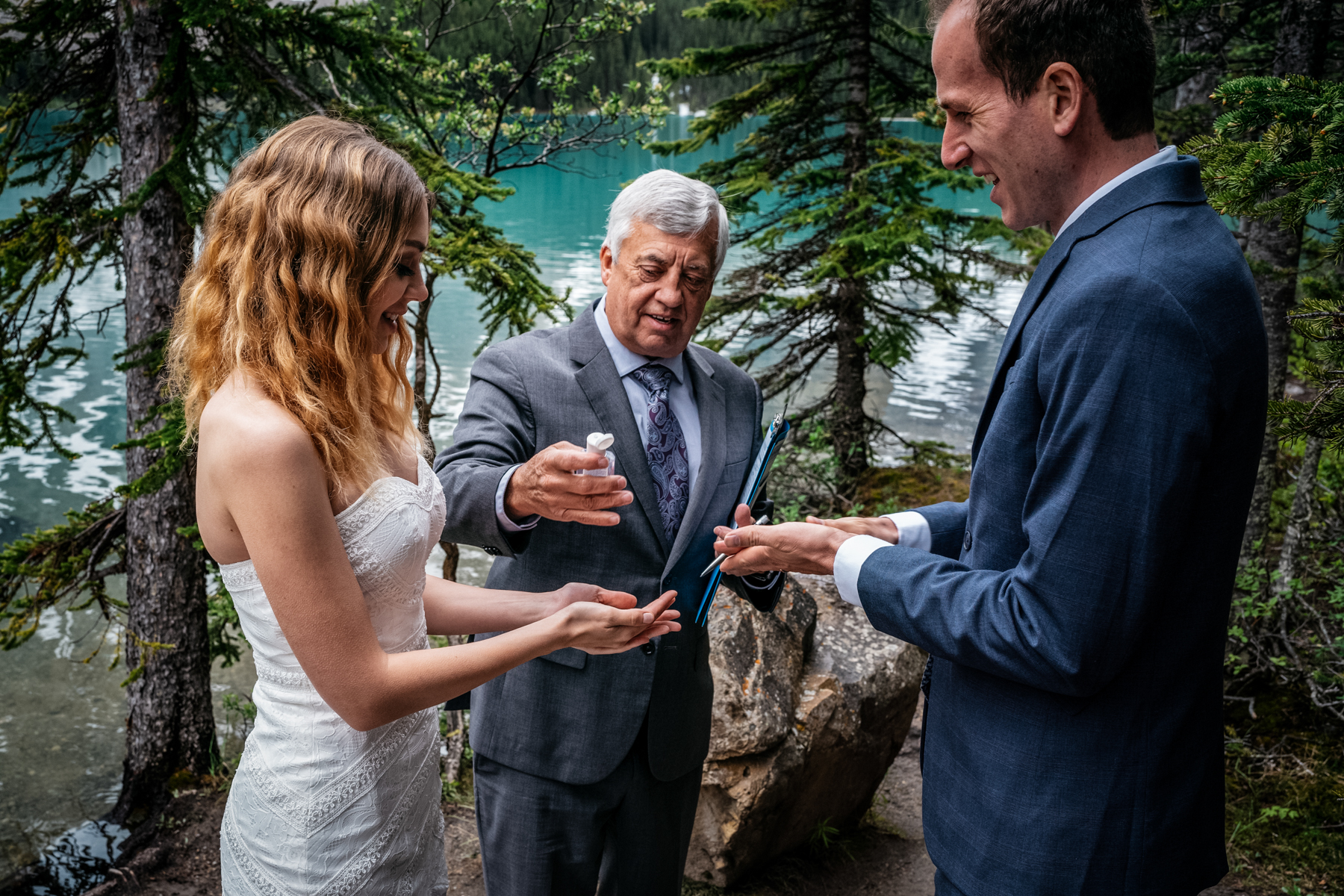 A sign of the times, the wedding officiant asks the bride and groom to sanitize their hands after signing the marriage certification. 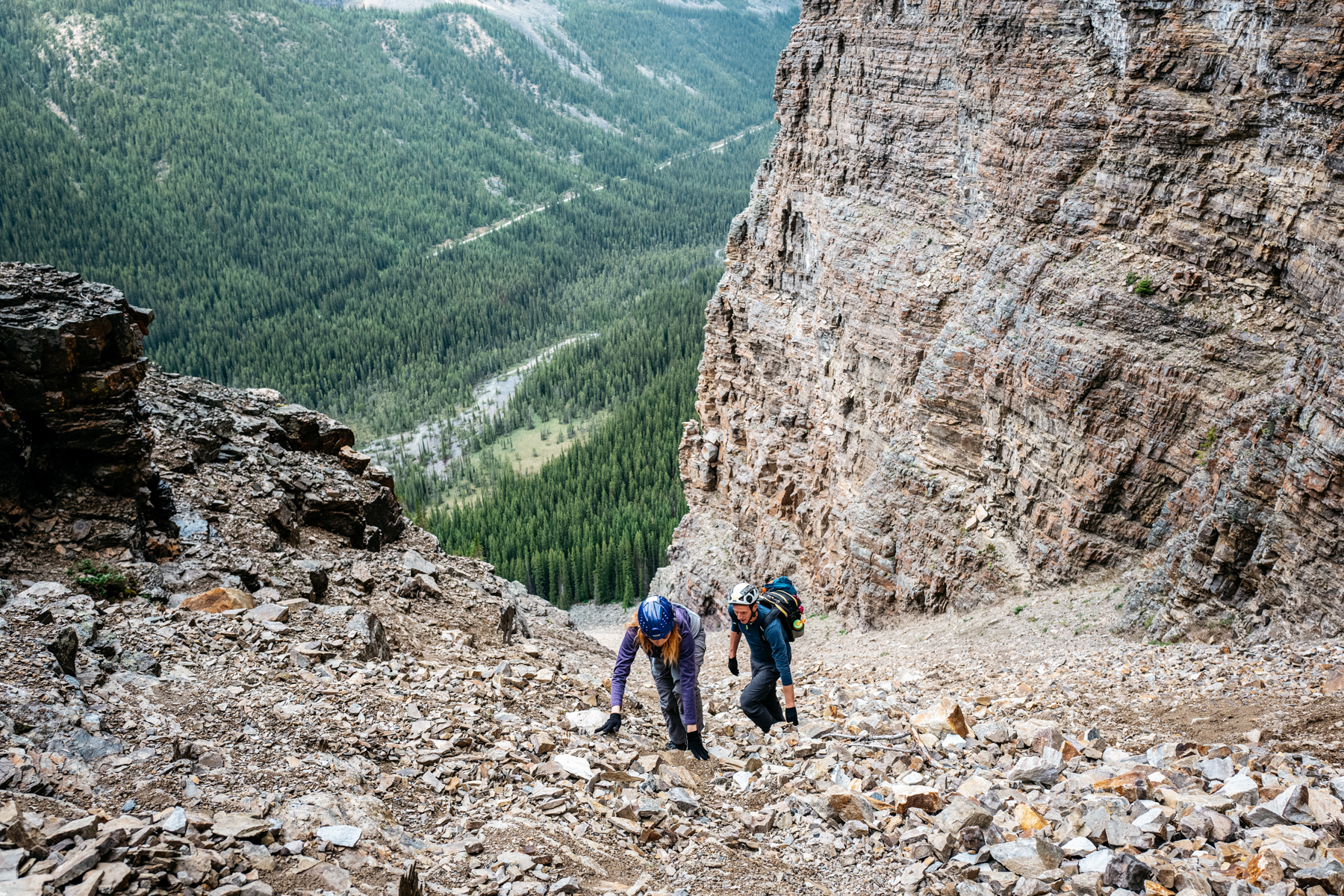 Following the wedding ceremony, the newlyweds change into their climbing gear in order to reach the top of the Tower of Babel for an epic portrait session. 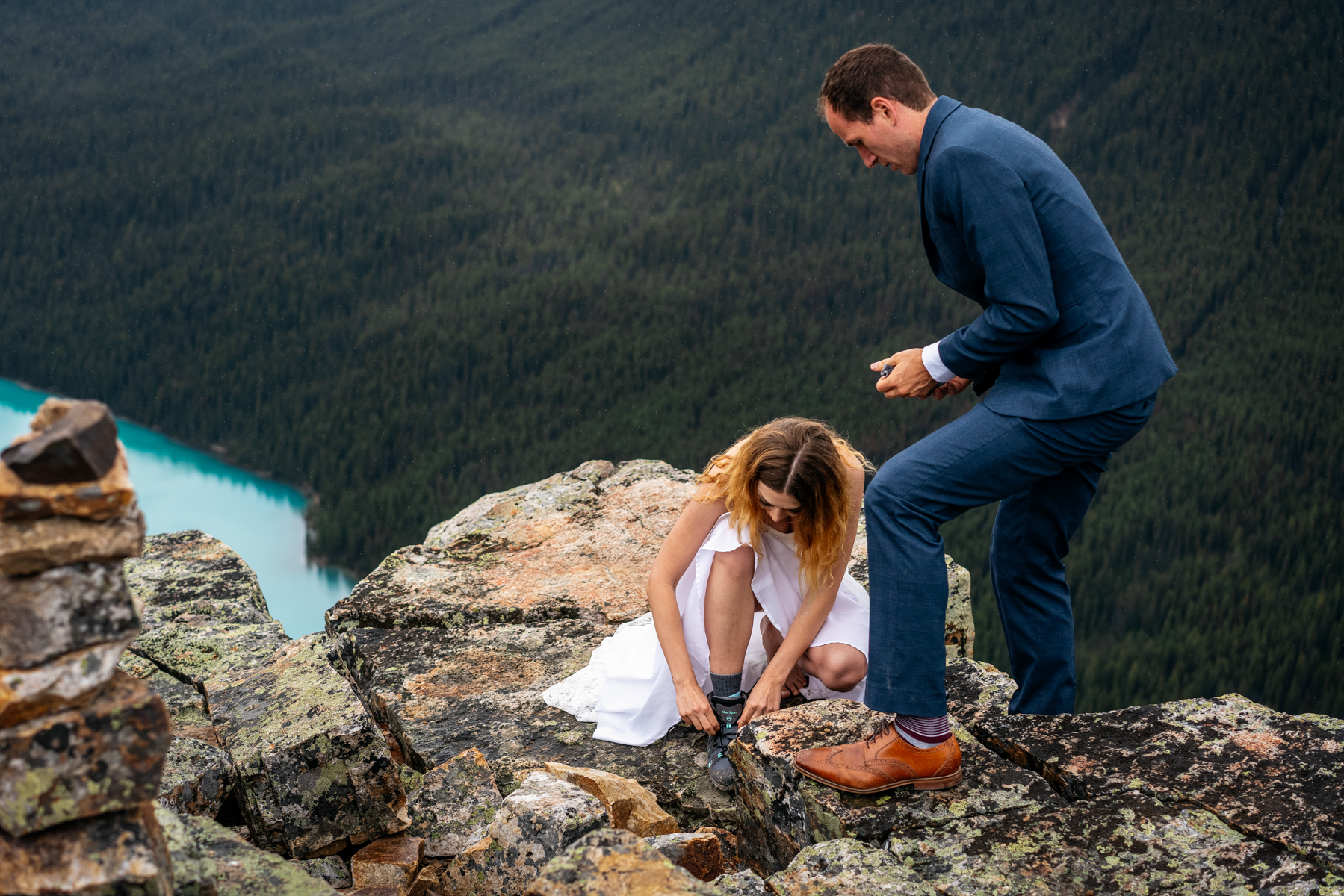 After reaching new heights together with her husband, Mila changes back into her formal wedding gown and shoes. 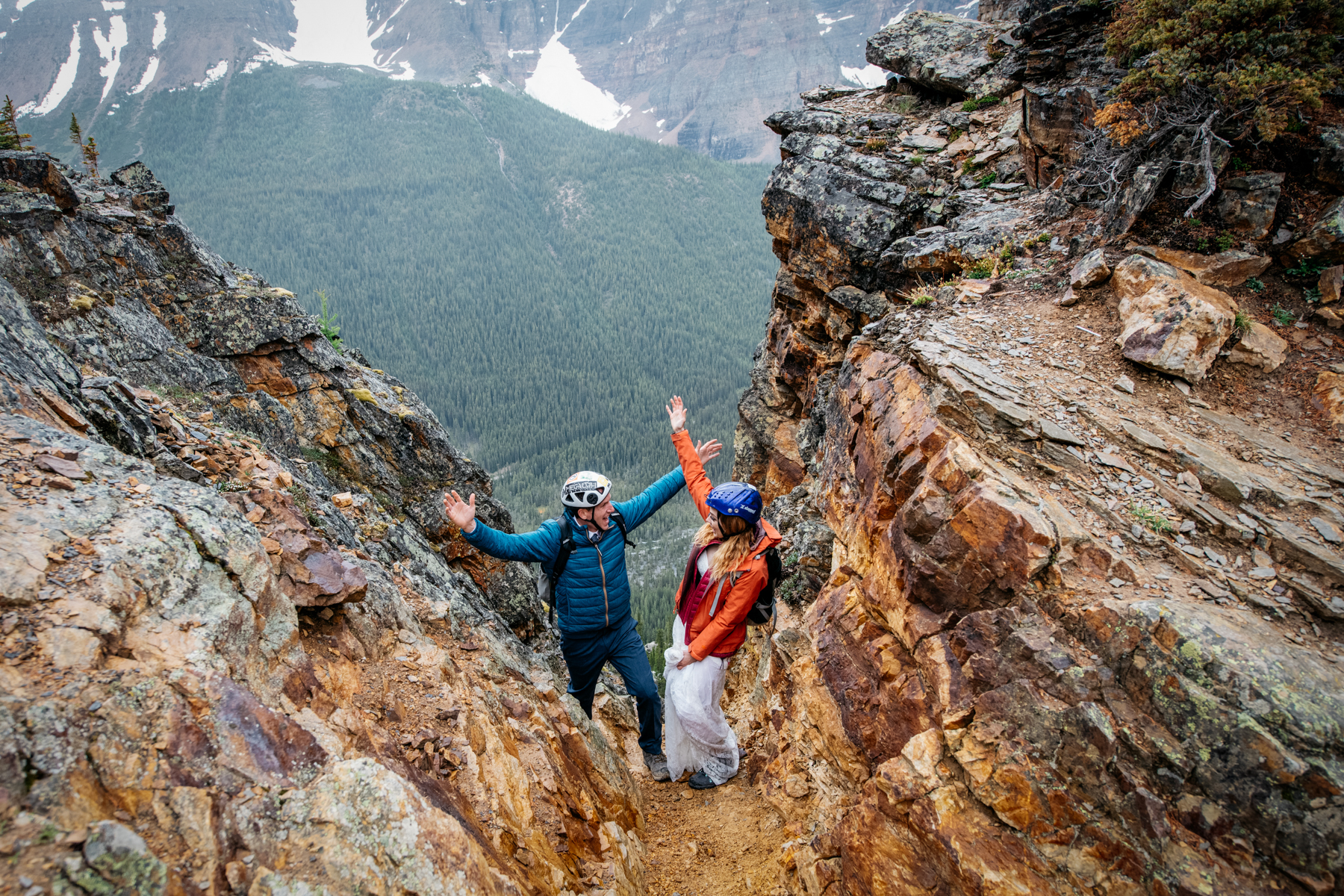 Back in their wedding attire, Peter and Mila begin to embrace, knowing that they have already accomplished a great feat together in the first hours of their marriage. 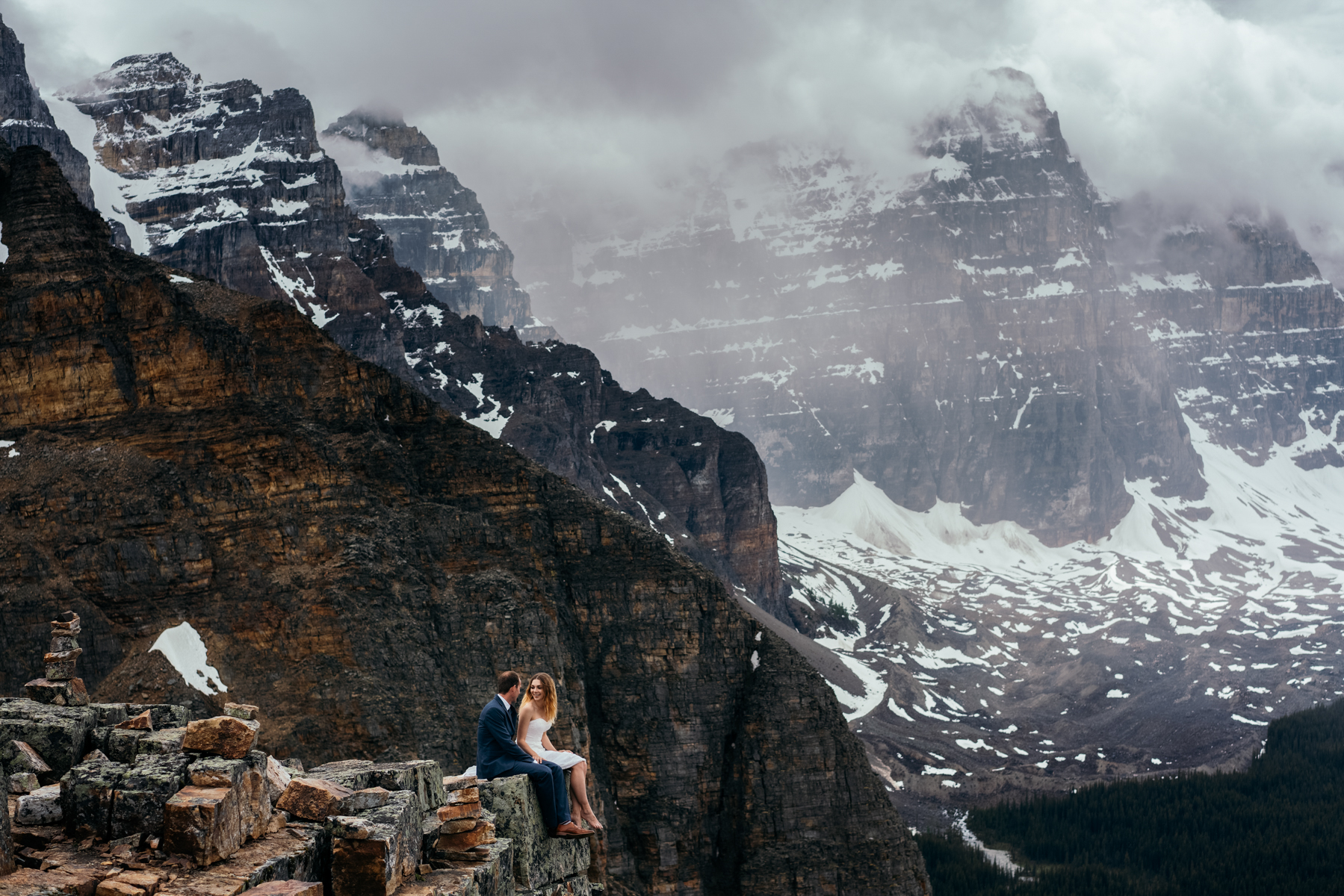 With her bare feet swinging off the edge of the mountain, Mila takes a moment to cherish the fact that she is sitting on top of the world with the love of her life. It's a wedding portrait that speaks volumes about their love of adventure, their passion for one another, and the endless potential of their new marriage.