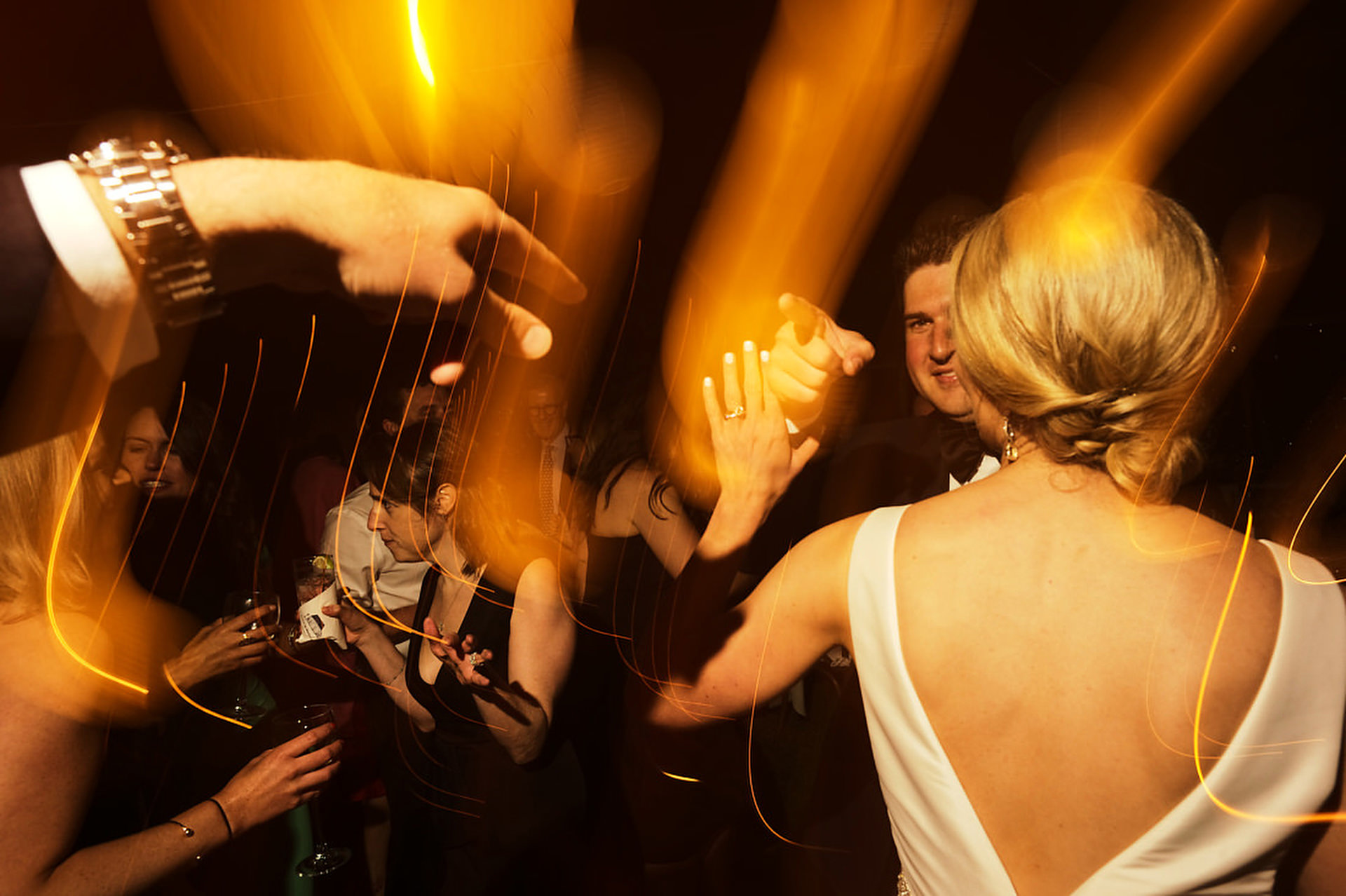 Dragging the shutter is a basic photographic technique that is often put to highly creative use by the best wedding photojournalists. Whether depicting the bride mid-whir during a dance, or documenting a child bounding down the aisle at the church, dragging the shutter helps produce images that contain a sense of motion and bring an added dose of festivity to what, for some, already feels like a whirlwind day.

When photographers “drag” the shutter by slowing down its speed, they effectively lengthen the exposure in order to create a motion effect. Optionally, a burst of flash can also freeze the primary subject in the foreground.

By keeping the shutter open that fraction of a second longer during a flash photograph, the camera is able to pick up more ambient light from the background, producing a warmer photo with more distant detail. Otherwise, in poorly lit rooms (in which wedding events are often held), such as reception and catering halls, you can end up with photos of people who look like they’re in a pitch-black cave.

Whether you choose to drag the shutter or light the flash, the overall result is a more dynamic photo, with more storytelling possibilities. 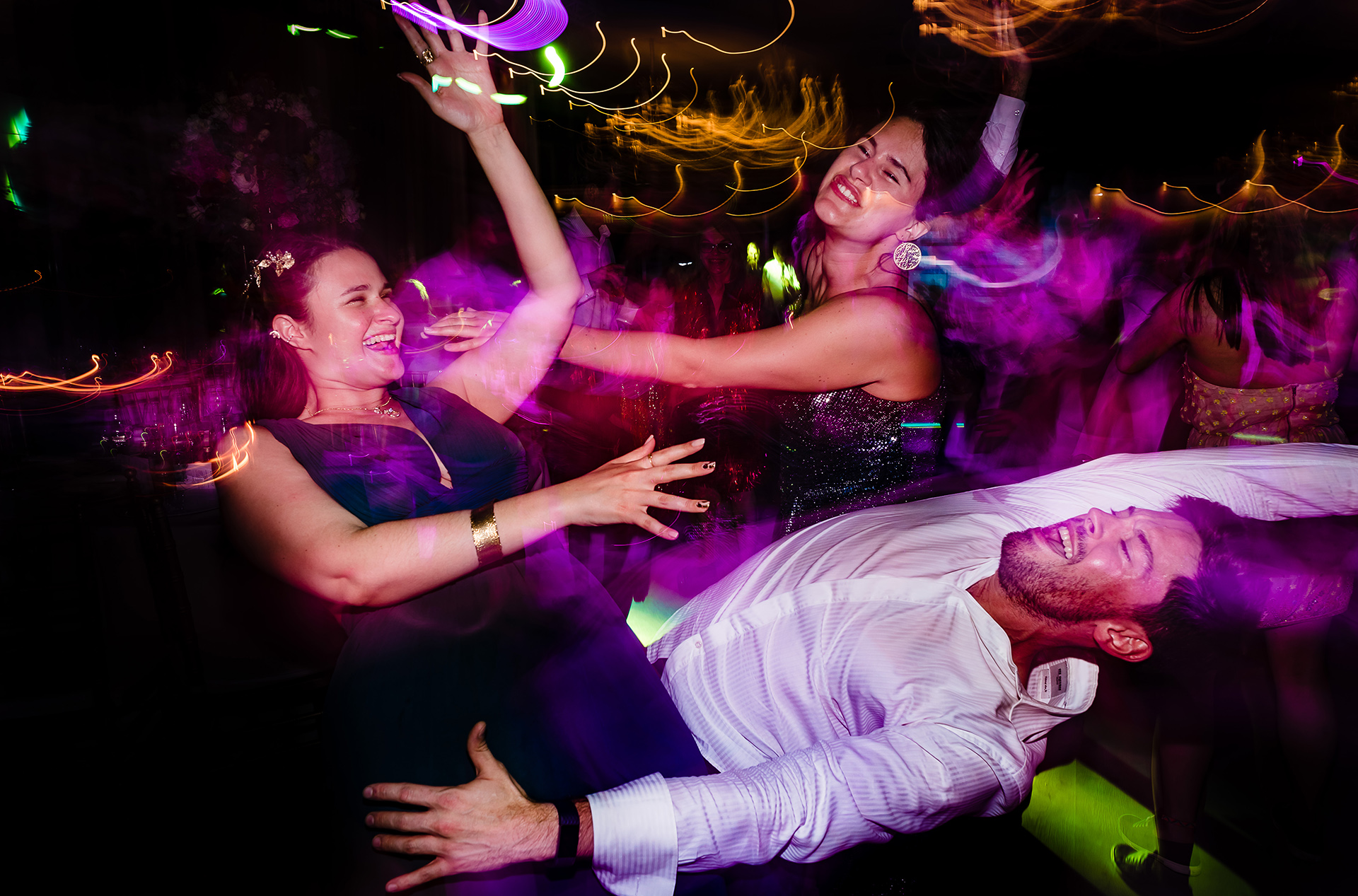 AROUND WE GO: CIRCULAR MOTION

Face it: There’s a reason they call it a “wedding party.” Once the music starts, most attendees—from grandmas and grandpas down to the flower girls—take it as a cue to get down.

With all the spinning, shaking and gyrating that comes with the dancing, WPJA members will sometimes choose to drag the shutter to show the movement of the partiers. Paired with a flash, this produces a sort of controlled blurring of the background, while keeping a sharp focus on the primary subject.

Photographers most often use this technique during reception dancing, particularly traditional circular dances like the Jewish or Greek horas. The result adds to the festive atmosphere and heightened emotions of the moment, allowing the viewer to fully experience the controlled chaos on the floor.

To illustrate -- during the circle dance, when everyone is moving from left to right in concentric circles, the photojournalist will usually rotate with the subject they’re trying to shoot, panning the camera by moving it laterally across the overall scene, to increase the background blur and sharpen the subject. To get the desired effect, the photographer will then move from left-to-right while the subject is moving right-to-left, freezing them with the flash and leaving the surrounding partygoers as a blur.

One of the main keys to successfully taking these photos is using the rear-curtain sync feature on the camera, whereby the flash goes off at the end of the exposure, rather than at the beginning of it. That allows the camera to record the motion and then freeze it at the end with a pop of the flash.

Conversely, with the front-curtain sync, where the flash goes off first and then the camera picks up motion, the motion can distort the moment you are trying to freeze. 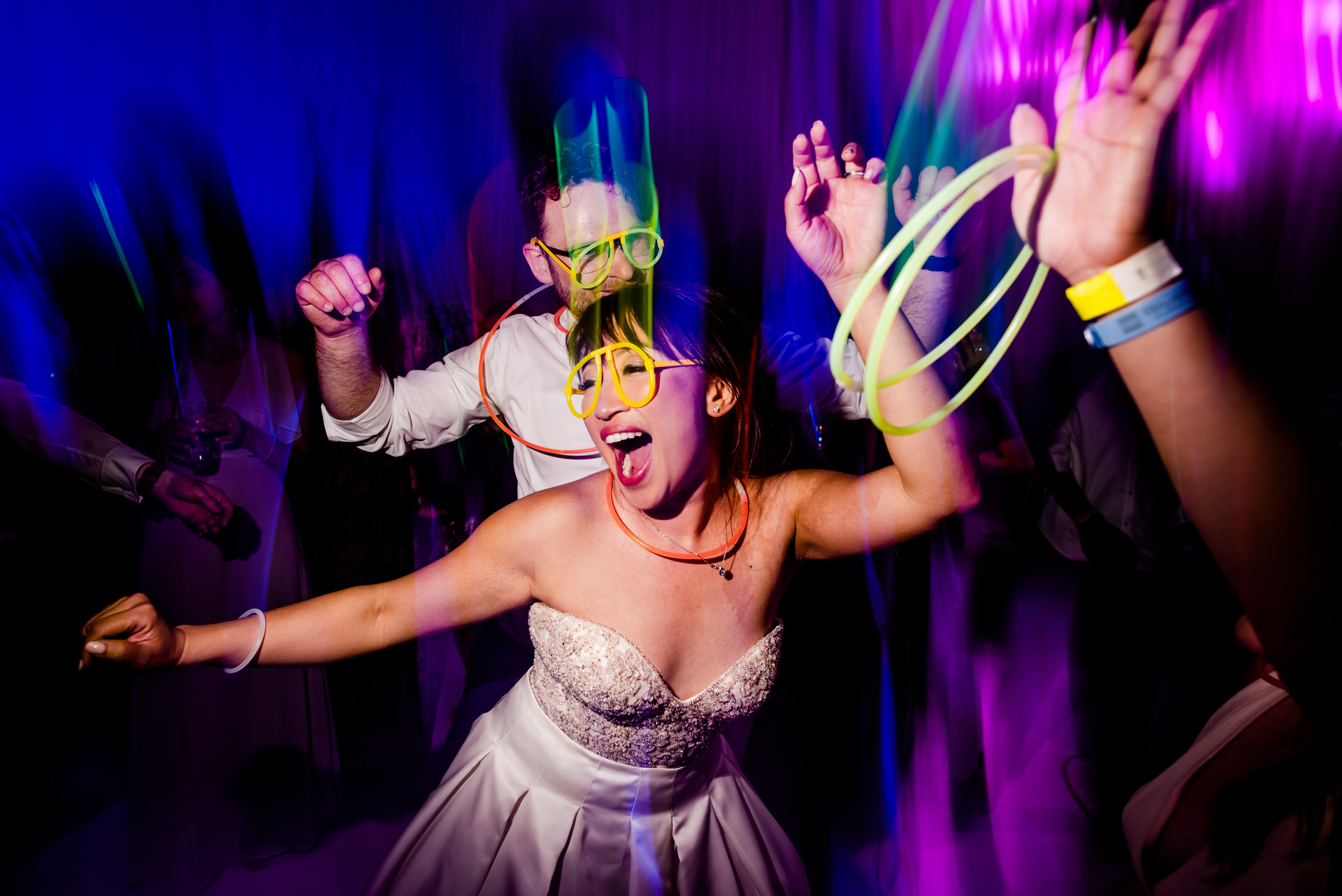 Dragging the shutter can allow you to use the blur to your advantage, creating the effect of the subject crossing your path. This helps capture a sense of movement, an effect commonly seen in professional photographs of auto racing. Otherwise, shooting a photo at an adequate speed to stop the action produces an image that lacks that same dynamic atmosphere.

Of course, the greater focal length of a long lens increases the likelihood of noticeable camera shake and motion blur at slower shutter speeds, which sometimes may be creatively desirable. Generally speaking, a 50mm lens should be used with a shutter speed no slower than 1/50th sec for a sharp image. Going slower than that will probably yield that motion blur, whether desired or not. A 24mm lens has the same effect at about 1/25th second; a 100mm lens at 1/100th sec. Some wedding photographers will even try to get the shutter speed down to 1/15 of a second or slower with a 24mm wide lens, or down to at least 1/60 of a second with a longer lens, to create maximum blur.

During a typical wedding day, there are many moments which may perfectly lend themselves to using this technique; from the bride’s hurried preparations at home, to members of the wedding party walking down the aisle, to the newly-crowned couple exiting the church as husband and wife for the very first time.

In any of these instances, panning the camera along your subject’s path of movement will create that stunning “frozen in time” effect, complete with motion-blurred background. When editing the shot, retain as much of the motion-filled background as possible, as this is truly what gives the moment life and a sense of place.

Panning the camera across the scene with a slow shutter speed also turns any light source, be it candles or light bulbs, into streaks of light, which can create some cool effects. Twisting the camera in a circle during a long exposure produces circular streaks of light. Another trick to try is zooming in or out while the shutter is open, which can create some funky effects. Experiment, but understand that some techniques can be difficult to nail down as planned.

Dragging the shutter at an especially slow speed of one second or more can produce some dramatic images that really capture the ambiance of the room. Using a tripod, you can create photos which record the furniture, decorations and other static objects while blurring the motion of the scene together.

If you’re lucky enough to have access to a balcony, you can create an extreme effect by taking an overhead shot of the party with a stationary camera, opening up the shutter and pulling in some psychedelic blurs. The inadequate indoor lighting can actually help with the result, providing a warm glow that perfectly captures the mood of the reception.

Dragging the shutter is certainly a much-used staple for ensuring that enough ambient light can enter the pictures. Many photojournalists use this option at receptions because of its ability to bring more detail into the background.

But beyond that, this technique has the potential for overuse, adding blurs and lines that can give guests a bit of motion sickness if there aren’t enough other photos to slow down the day. Dragging the shutter to add a more artistic touch should be used in modest measures, providing a nice contrast to the action photos that capture a freeze frame of, say, dancers in midair or a quick kiss between the bride and groom.

Also, results will vary. Despite all your practice and skill, taking photos using a technique with so many moving parts can inevitably lead to some throwaways. So, are you willing to gamble on a moment the couple expects to see? It may be a good idea and a safe bet to pass on dragging the shutter for some of the wedding’s most poignant moments.

In anything you do, it’s always a good idea to keep in mind that age-old advice: Keep it simple. In wedding photojournalism, the most powerful special effect will always be a happy couple.