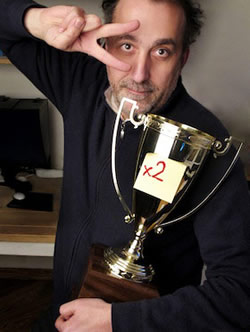 Carletti credits his historic accomplishment to an unwavering belief in wedding photojournalism. “WPJA is more than just a collection of photographers,” says Carletti from his home in Siena, Italy, in picturesque Tuscany. “It’s a style that has changed wedding photography. When I photograph a wedding, this style is in my head and heart. It allows me to tell the spontaneous story of the wedding day.”

Carletti’s photojournalistic sensibility, forged by many years spent working for magazines and newspapers, energize his award-winning images with wit, style and drama. Storytelling is key to Carletti’s success. He sees weddings as books with chapters, he says, and it’s up to him to find “the connecting thread running through the scenes. ”To do that Carletti never uses a telephoto lens. He prefers jumping into the action using wide angle (24mm) to normal (50mm) lenses on his Canon and Nikon digital cameras for up-close, inside perspectives. Carletti knows he must feel the moment to capture it effectively, and he cannot do that at a distance. 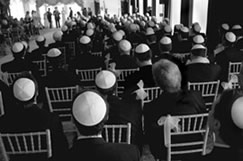 Over the course of his nearly 25-year career, he has published four books of photography. Winning the POY award in 2006 brought him international attention and he now photographs American and English couples that want to marry in Italy. He travels extensively throughout the country photographing weddings but cites Venice as his favorite location.

His work is currently on exhibition in Galleria Istantanea in Siena, which Carletti recently opened with four fellow photographers to promote fine art photography. Included in the show are some of his wedding photographs. “We want to show that wedding photography can have artistic integrity.”