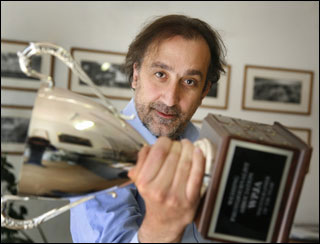 In addition to numerous WPJA awards, Carletti was recently honored with one of PHOTO magazine’s Wedding/Portrait Images of the Year. Carletti has a distinct style, capturing intimate moments through a wide-angle lens at close proximity to his subjects. This, he feels, avoids the detached telephoto perspective.

Pulling from his roots in journalism, he’s most interested in capturing the narration in every event. As such, he believes great photos can arise from any wedding, as each has its own story to tell. For great results, Carletti shoots with a specific goal in mind: to make each image aesthetically pleasing and timeless. Everyone viewing his photos can find that story, feel that sentiment or relive that moment.

When asked what makes a great wedding image, Carletti said it comes from “the unpredictability of a situation or emotion,” or when something happens that interrupts the plain and predictable rituals. As you walk through each narrative, you notice a strong sense of place. Not fond of portraits for their own sake, Carletti embraces the whole event – the architecture, the skyline, the surrounding guests – without losing sight of that intimacy. “Environment, ambiance and, therefore, architecture are extremely important to me. This provides narration for the story. I want each couple to find a sense of themselves in relation to the space around them,” he explains. “I don’t deny, therefore, that I often ask them to move freely near or in relation to evocative architecture for a strong scenic impact.” Also setting Carletti apart are his strong horizontal crops and striking use of black and white film. This creates rich, vivid and extremely dramatic images, capturing natural lighting along with both foreground and background details. Why does he shoot 95 percent of his photos horizontally? “Our eyes are set horizontally. We write and read horizontally. Cinema and television have horizontal screens.” For Carletti, this is the most natural angle to capture.

Why does he prefer black and white to color? He stopped questioning himself on his attraction to black and white photography long ago. This, he explains, is just an artistic preference, perfectly suitable for conveying the deep emotion in any given moment. Carletti’s favorite clients forget they’re in front of the camera and simply live in the moment.

For those considering his photography for their wedding day, he hopes they select him based on his passion and determination for shooting the narrative and authentic emotions as opposed to a pre-packaged repertoire of posed celebratory images. To that end, his clients are always thrilled with the end result, having photos that let them re-live cherished moments over and over again.